The concept chart Three Eras of Health Care shows the changes over time in typical causes of death in the United States, key actions that help reduce deaths from those causes, who drives them, and their impact on life expectancy.  Importantly, it also highlights the changing role of the individual in improving life expectancy in each era. 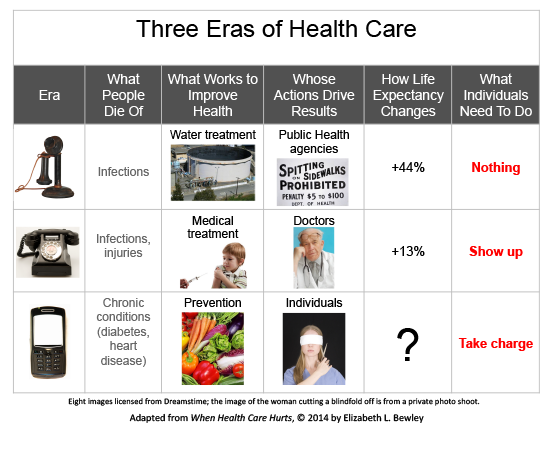 In the first era, people often died of infectious diseases.  Health improved when professionals in public health agencies drove efforts to clean up the water supply and improve sewage treatment,215 leading to a big leap in life expectancy.  People born in 1900 on average lived to age 47.  People born in 1950 on average were expected to live to age 68.216  Professionals didn't need to involve each person individually to drive these changes.

In the second era, during the mid-1900s, people still died of acute conditions such as infections, injuries, and other problems that arose suddenly.  Health improved with acute interventions—treatments given once or over a short period of time—such as penicillin, vaccinations,217 and surgery.

It was the job of doctors like those celebrated in Norman Rockwell paintings to take the actions needed to improve health. Individuals in this era did have to do something: they had to show up. But that’s about all. The doctor, who was epitomized by television’s fictitious kindly general practitioner Marcus Welby, M.D., did everything else. Average life span rose 9 years.218

Today we are in the third era. Thanks to the great and continuing successes of the prior eras, we now have the “luxury” of dying of chronic diseases, such as diabetes or heart disease. These typically develop slowly and aren’t cured, but instead are managed in order to reduce the harm they cause. In this era, 70 percent of people die from chronic conditions.219

What counts most in preventing or managing these diseases? It’s the actions people take daily regarding diet, exercise, alcohol, tobacco, and stress.220  People go to the doctor on average three times a year.221  It’s what they do the other 362 days that largely drives their health.  Do they go for a bicycle ride or do they play video games? Do they order the small ice cream cone or the triple-decker? Do they fume about their boss or find a constructive way to manage their stress?

When common chronic diseases are the issue, doctors cannot make good health happen. They can’t snatch the potato chips off your lunch tray. They can’t drag you off the couch after dinner to go for a walk instead of watching old Law & Order reruns. They’re not there to do it. And, unlike the case in the second era, they can’t simply give you a shot to make you better.

In this era, rank amateurs—regular people—are the ones who have to take the actions most needed to improve health. But patients and doctors alike are trained to expect the experts to take charge. Patients have been trained to be passive. Doctors have been trained to believe that the grand finale to an illness or injury is the treatment they give. Then the credits roll and the lights come up.

2019 update by the author:  a minor but important indicator that the above is still the case follows.  I recently saw a specialist who did not tell me his conclusions.  He ended the visit by saying, "I'll send my report to your doctor."  He did not offer to send me a copy.  If patients were consistently viewed as key players in their own health and health care, practitioners would provide such records to them as automatically as they send the records to other doctors.

Health care simply hasn’t recognized that in this third era, the patient is often the central actor, on stage far more than the doctor.