Consider two questions when a doctor orders a treatment for you:

These two questions suggest four possible results, as shown in the Four Box Model for Outcomes.93 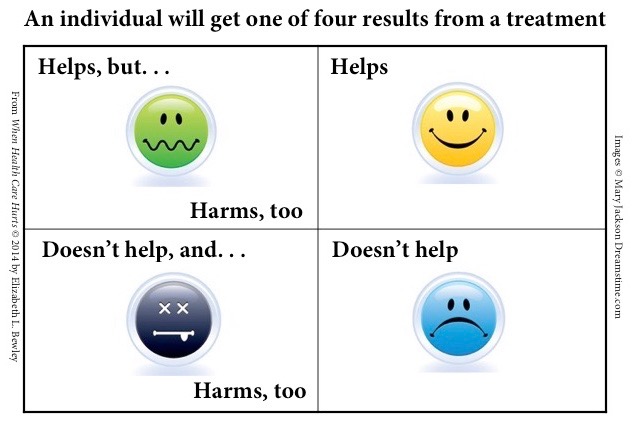 The box in the upper right is a great place to be: the treatment solves your original problem and doesn’t create any others. However, because treatments typically help only about half the time, half the people fall in one of the bottom two boxes.94

In the lower right, the treatment doesn’t help, but it doesn’t cause any serious side effects or complications either. That doesn’t sound so bad.  But if you land in this box, you may waste time and money and just get sicker.

In the lower left, the situation is worse. The treatment doesn’t help with the original problem, AND it creates new ones.

In the upper left, the treatment helps, but also causes side effects or complications that might be worse than the issue that led you to seek care.

Every person getting any treatment will land in one of these four boxes.

It’s questionable whether people in the upper left-hand box should continue with the treatment (for example, a drug for a chronic condition). Only people in the upper right-hand box should, almost without question, be encouraged to continue. However, health care professionals too often act as if that box—where only good things happen—is the only box.

Drugs, surgery, and other treatments are powerful tools that save lives every day.  But they also harbor hidden dangers.  Consider a few statistics:

One study found that when side effects created medical problems that could have been prevented or fixed—but weren’t—it was because doctors didn’t recognize that the patients’ symptoms were in fact side effects.59

Dr. Beatrice Golomb at the University of California at San Diego found that when people thought they were experiencing a drug side effect, scientific evidence strongly suggested they were typically right.  And it was almost always patients—not doctors—who suggested a possible link between a new symptom and a prescribed drug.60

Patients were told, “You’re just getting old,” and “There’s nothing wrong with you; it’s all in your head.”61  Severe pain was dismissed as “a little discomfort,” and doctors implied that their patients were overreacting.62

According to an endocrinologist at the Mayo Clinic quoted in the New York Times, typically a patient must gain 100 pounds as a side effect of a drug before many doctors consider it a problem worth addressing.63

Chillingly, doctors often insisted that patients keep taking medicines causing grave harm—not because they carefully weighed the benefits and risks, but as a result of dismissing the downsides entirely.64

Health care experts often talk about how to get you to take all the drugs prescribed for you, a result they call “compliance” or “adherence.”

A national campaign cautions, “If you don’t take your medicine as directed, you’re putting your health and future at risk.” It urges people to “Take the Pledge Take Your Meds,” (emphasis in the original) and offers “I will take my meds” pledge cards.95

An insurer wrote, “Taking medicine is an important part of staying healthy. It’s very important to take your medicine exactly as ordered.”96

A doctor wrote in a medical journal that doctors’ success depends on “our ability to engage our patients and ensure that they take the medicines we prescribe.”98

A new tool for encouraging compliance is the FICO Medication Adherence Score, which draws on personal information such as age, employment status, and home ownership to predict how likely people are to take their medicine. Doctors, insurance companies, and others will target people with low scores for stepped-up compliance efforts.99

These tactics might be fine if all treatments worked for everyone and side effects were no big deal. But neither is the case.